The origin of the kora is surrounded in legend and folklore; with many different stories about when it first came into existence.  The kora is just one of the instruments used within Jali families of the Mande people in West Africa – found in Guinea, Guinea Bissau, Mali, Senegal and the Gambia.

Jali are also referred to as ‘griots’ but this is a French word and the term ‘jali’ is often preferred.  The kora is part of an oral tradition,  passed down through family generations.  Children in Jali families grow up with the history, the stories and the music and begin to learn an instrument at a young age.  These stories and songs tell the tales of great warriors, of Kings, of Jalis themselves and of the patrons who supported them.

The Jali families of West Africa are themselves a hereditary caste of musicians from within the Mande people and are more than musicians; they are praise-singers, genealogists and historians, playing a crucial role within the society and part of every important event such as naming ceremonies and marriages.

The kora, the balafon and the ngoni are among the instruments played. It seems to be agreed by most that the kora, the last of the three instruments to appear, did not become used widely across the region until the end of the 1700s; until then it is was only seen in the small Mandinka areas on the coast.  Whilst the kora is a large part of the history and culture of Mali for example, it did not originate from there. For example, one of the most celebrated kora players in the  world today is the Toumani Diabate who has helped to bring Mali and the kora to an international audience. His father, Sidiki Diabate, was born in The Gambia and moved to Mali as a child.  The whole region has always been more fluid than the country borders suggest.

The advent of recorded music has had a major impact on the role of the Jali, but has also enabled the music to travel far and wide.  A number of musicians have helped make it more widely-known throughout the world, expanded its repertoire and developed diverse styles associated with different areas.

Other variations can include the type of musical accompaniment; in Mali the kora player is generally accompanied by a singer whereas in other parts of West Africa the kora player often sings by himself. Also in the Jaliya tradition it is men that play the kora. Outside of this tradition, both men and women play this beautiful instrument. Sona Jobarteh is the first celebrated female kora player.  More recently some Jali fathers have been encouraging their daughters to play too.

The information given here is true to the best of our knowledge, and with any oral tradition there are very many explanations and stories. If you’d like to read more about the Jaliya history we have sourced and listed some useful resources available on our Music, Books and Films page. 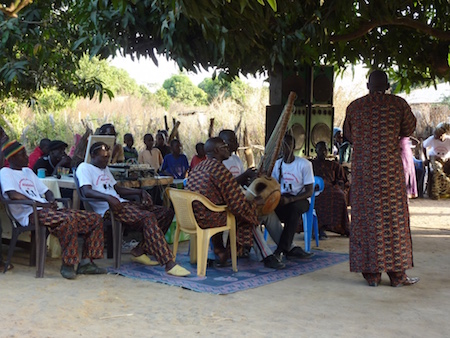