The above video was produced by Chris Hayden who was staying at Mas de Jammes in France where we hold our group workshops.  It is beautifully shot and we are delighted to be able to share it with you. 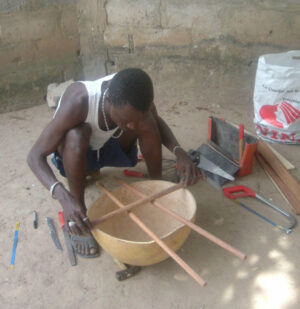 Aliou Gassama, shown here, and Adam have worked together for many years, supporting each other as both developed and refined their kora making skills.

The kora is made from a large gourd known as a calabash.  It is cut in half, emptied and dried and covered with animal skin.  In West Africa this is generally cowskin, though historically it would have been bushbuck.  We generally use deerskin which gives a finer finish, a better sound and is nicer to work with. 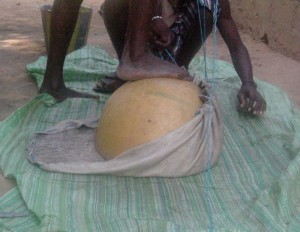 The skin has to go through many processes before it can be put on the calabash: it is soaked for several days, and the hair is scraped off. The skin is stretched over the calabash, pulled very tight and tied into place.  The horizontal cross bar, and the two vertical handles are pushed through holes made in the skin. The kora body is left to dry in the sun and tacks are used to finish and secure the skin, with excess skin being cut away. Tacks are also used to decorated the kora. 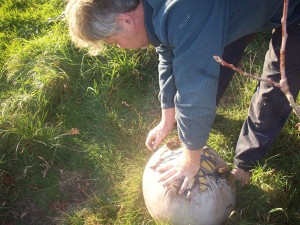 either has konso (hide rings) or guitar machine heads on it,  then goes through two holes in the kora body, one at the top and one at the bottom of the calabash.   The koras we make are approximately 1.3 metres high but they can vary from just over a meter to 1.4 metres. Ours generally weigh between 3kg and 7kg, depending on the timber and extra weight like bass heads.

A ring goes through the neck at the bottom underneath the calabash and the tail strings are tied onto it.  A wooden pad (often covered in cloth) is then placed against the skin and the  notched bridge sits perpendicular to it, with each notch holding one of the strings. 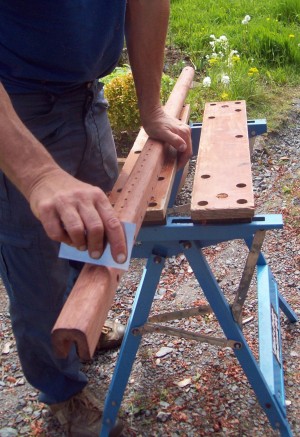 Strings were originally made from animal hide and gut but now nylon line is used. The 21 fishing line strings are then tied to these tail strings and go over the bridge up to the neck either to a traditional hide ‘konso ring’ or a guitar machine head.

Some koras, particularly in the Casamance area of southern Senegal and in The Gambia, have an extra bass string so the 22 string kora is common there. Some kora players do use more, but this is relatively unusual. 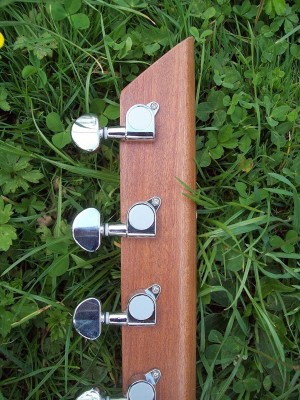 All that’s left to do is tuning,  some tuning and a little more tuning! Once a kora settles down, which can take several months,  it should stay in tune most of the time, though changes in temperature and humidity will have an effect on it.

Making a kora can take anything from a few weeks to several months, depending on the availability of materials, the level of work required on the woodwork and not least… the weather.